NOTICE: The following article is written by the author itself and not by me, I am not trying to violate their copyright. I will give some information on them.

PAGE TITLE: http://www.blackgenocide.org/home.html
ARTICLE TITLE: Margaret Sanger Would Have Loved Barack Obama
DATE: Wednesday 5 March 2008
AUTHOR: Pastor Clenard Howard Childress, Jr.
AUTHOR INFORMATION: Pastor Clenard Howard Childress, Jr., a lifelong resident of Montclair, New Jersey, joined the New Calvary Baptist Church in September of 1974 under the pastorate of Dr. Shellie Sampson. In 1978, he was appointed Director of the Youth Department, to organize and educate youth.
He also served as Chairman of the Board of Trustees, Superintendent of the Sunday School Department and Vice-President of the Outreach Ministries.
Pastor Childress successfully completed Northern Baptist School of Religion in 1986 where he majored in Christian Education. He was ordained in 1988 by the North Jersey Shiloh Association and later installed as Senior Pastor of New Calvary in April of 1989.
In 1997, Pastor Childress, along with his wife Regina, founded the Eutychus Mission, a ministry designed to provide continued rehabilitation and assistance to recently released juvenile detention detainees back into the mainstream of society.
In October of 1998, Essex County Executive James Treffinger honored Pastor Childress’ faithful and effective work at the Essex County Juvenile Detention Center by installing him as a Chaplain.
In November of 1998, he founded the Celebration of Life Day Care Center, which provides loving Christian care for children from infancy to 5 years of age.
In August of 1999, Pastor Childress was appointed President of the Life Education And Resource Network (L.E.A.R.N.) in Northeast Region. He was a chief organizer of the "Say So" March to the U.S. Supreme Court in Washington, DC.
In November of 2000, Pastor Childress was awarded the Community Service Award by the Montclair Chapter of the N.A.A.C.P. for his dedicated work in the community.
In May 2001, Pastor Childress began broadcasting "The Urban Prophet" taking the pro-life pro-family message into the urban areas.
In September of 2002, Pastor Clenard H. Childress Jr. birthed the Pro-life website Blackgenocide. org. This website was designed to reach the Afro-American Community with the truth about abortion.
In January 2003, Pastor Childress was appointed a member of the National Pro-Life Religious Council of Washington, DC.
URL: http://www.blackgenocide.org/archived_articles/obama.html 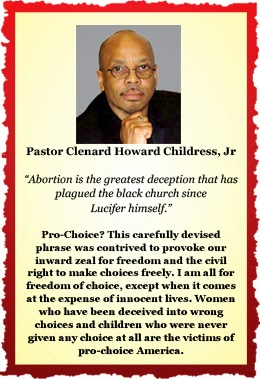 Revelations of eugenic ideology and the racist practices of Planned Parenthood are unfolding more and more.

the public is just beginning to believe what people of conscience have known long ago: Planned Parenthood has diabolically perpetrated their murderous plot to surgically eliminate those they deem undesirable.  In other words: kill the babies of unsuspecting minority women by aborting their children.  Then, tell them this is a "good thing" for you and your people.  No other ethnic group in the United States has been decimated more by abortion than the Afro-American community.  The war being waged upon innocent captives in the womb is led by Planned Parenthood.

Convince the targeted community to accept their eugenic racist plan by selecting one from their ethnicity to promote it.  One of Planned Parenthood's earliest known projects was in 1939.  It was called the “Negro Project” -- a project designed to control the birth of "human weeds" which was how Margaret Sanger referred to colored people; a project designed to introduce abortion, sterilization and different forms of birth control.  This is what a co-eugenic wrote to Margaret Sanger to make sure the "Negro Project" was a success:

Clarence Gamble, heir of Proctor and Gamble, wrote a memorandum in November, 1939 entitled: "Suggestions for the Negro Project."  In the letter he suggested black leaders “be placed in positions where it would appear they were in charge."

This is a letter to Clarence Gamble, from Margaret Sanger, in which she wrote,

"We should hire three or four colored ministers, preferably with social-service backgrounds, and with engaging personalities.  The most successful educational approach to the Negro is through a religious appeal.  We don't want the word to go out that we want to exterminate the Negro population and the minister is the man who can straighten out that idea if it ever occurs to any of their more rebellious members."

For those of you that don't know, Barack Obama became a "minister" of Planned Parenthood a long time ago.  He's so good at carrying out their racist, murderous, agenda against Afro-Americans and society at large, they gave him a 100% score on his voting record.  Planned Parenthood is following the strategy of their racist founder, Margaret Sanger, to the letter.  Planed Parenthood is saying, “We have our poster boy!  Get him out in front as a lure for their women and men.  Get them into our abortion clinics and dismember their children by the millions!”  You say absurd?  No Way!  Planned Parenthood’s Valentine cards were sent out to hundreds of thousands of young people in the nation.  Whose face is plainly seen waving to them with a big smile?  Whose endorsement is given to this racist and calloused organization?  Who is used to lure children to give credibility to its hideous plot?  Barack Obama, that's who!

On July 17, 2007, Barack Obama said the following before the Planned Parenthood Action Fund:


The first friend mentioned is, Cecile Richards, who he commends for extraordinary leadership in killing babies who are disproportionately black.

The second is, Steve Trombley, who is the president of Planned Parenthood Chicago. You can imagine how many of our young women have been victimized and whose pre-born children were killed under his supervision.  His third friend he mentions is, Pam Sutherland. She is the State CEO of Planned Parenthood for Illinois.  America needs to know how much these folks were, and continue today, to be in the head and actions of Senator Barack Obama.  How much did he compromise his own values?

I choose here to quote Dr. Martin Luther King from his last Sunday sermon before his death:

"There comes a time when one must take the position that is neither safe, nor politic, nor popular, but he must do it because conscience tells him it is right.  I believe today that there is a need for all people of goodwill to come with a massive act of conscience and say in the words of the old Negro Spiritual, ‘We ain't goin' study war no more.’"


This is the challenge facing modern man.

When the challenge came to Barack Obama to call on conscience, he refused.  What most Americans would say no to, he chooses to say, yes to!  He refused to do what The Dream called for: to allow your conscience to tell you what is right and what would be wrong. You may ask, why, but always remember this observation: Abortion is a lot like slavery; if it was not lucrative, it would not have been legal!

Pam Sutherland ... of ... Illinois Planned Parenthood ... told ABC News, "We worked with him specifically on his strategy.  The Republicans were in control of the Illinois Senate at the time.  They loved to hold votes on 'partial birth' and 'born alive.' They put these bills out all the time because they wanted to pigeonhole Democrats. ..."

Let me interpret.  We, Planned Parenthood, told him what to say, and how to say it, so we could continue to kill infants; babies, just a few inches from birth, and those completely out of the womb that we missed!  Our "colored minister" was well prepared by Planned Parenthood.  Partial Birth abortion -- which I will not describe here -- but know that 80% of Americans don't want this barbaric act practiced in this country – Barack Obama voted to keep legal!  The Born Alive Victims Act is a law to protect a child that was born alive after a botched abortion; a law that would require that the child would receive medical assistance.  Barack Obama voted against it! Yes.  Barack Obama, with an "engaging personality" is being used by the leading abortion provider in the United States to promote and execute infanticide of predominately minority babies!

“I have a Dream, that one day, my four little children, will live in a world where that they won't be judged by the color of their skin, but by the content of their character ….”

Yes, I believe it would be wonderful to have a Black man as president, but it's more important for there to be, God's man as president, and that his character would reflect my values; values reflected in the 10 Commandments and our Declaration of Independence.  While most African-Americans are applauding him for the color of his skin, they have failed to look at closely the content of his character.
Martin Luther King, while sitting in a Birmingham jail, without the internet, cell phone, library resources, or communication from the outside, penned that famous prophetic letter to answer some local Pastors who questioned his use of public demonstrations.  Martin, in a portion of his letter, discussed the responsibility of the church to address social issues.  He said, "… the early church put an end to such evils as infanticide."  Martin Luther King wrote from the passion of his spirit -- the spirit that was fighting for justice and equality.  Martin called infant killing evil.  Barack Obama calls it “a women's right.”  Martin Luther King made his observation from a jail cell, having been put there for defending the civil rights of those whom had been denied theirs.  Barack Obama has made his from caucusing with those who profit from the destruction of babies in the womb.  These are men and women who ignore the silent screams of a lost generation.

Another quote from Dr. Martin Luther King that would be so appropriate here is, “The Negro cannot win if he chooses to sacrifice the future of his children for immediate comfort and safety."  It is now imperative we all hear the words of this great Prophet of God.  It is obvious we must reject the “Barack Obamas” who have placed us in great danger by their ideologies, a position Martin Luther King warned us we cannot expect to win!  Can we trust Barack Obama's judgment?  I think not.