TUCSON, AZ (Tucson News Now) - The death penalty is a possibility for the man accused of killing Isabel Celis and Maribel Gonzales.

Christopher Clements has been accused of kidnapping and killing the two Tucson girls years ago.

On Monday, Tucson News Now found out the state has requested more time in considering if it wants to pursue the death penalty in the case.

The state has until Jan. 24 to make its decision.

He is being held on $2 million cash bond in the Pima County Jail.

Celis was 6 years old when she vanished from her parents' east-side home in April 2012. Gonzales was 13 when she disappeared while walking to a friend’s house in 2014.

Gonzales' body was found days after her disappearance. Celis’ remains were not located until early 2017.

[ Indictment handed down in deaths of Isabel Celis and Maribel Gonzales ]

Both girls were kidnapped, killed and dumped in a remote area near Trico and West Avra Valley roads in Pima County.

Both investigations were cold for years, until someone contacted the FBI in February 2017. The source alleged Clements had information about Celis.

In March 2017, Clements led federal agents to Celis' body. At the time, Clements was in the Pima County Jail on burglary charges.

He agreed to reveal the location of Celis' remains if the burglary charges were dismissed and his vehicle was returned to him.

Authorities agreed and the charges were dropped, but Clements was not released.

[ Clements gets into fight at Maricopa County Jail ]

Instead he was transported to Maricopa County to face burglary and fraud charges there.
While in Maricopa County, authorities were able to put together a case against him.

He was indicted Sept. 15 and extradited back to Pima County Sept. 23.

1993: Christopher Clements accused of molesting a very young child. He was never charged.

2002: Clements convicted of identity theft and assault in Washington.

2006: Clements convicted of failure to register as a sex offender in Oregon and Florida.

2008: Clements convicted of failure to register in Tucson.

APRIL 2012: Isabel Celis' family reports her disappearance from their home.

SEPT. 15, 2018: Authorities announce 22-count indictment against Clements in deaths of Celis and Gonzales.

SEPT. 18, 2018: Clements gets into fight with two inmates at the Maricopa County Jail. 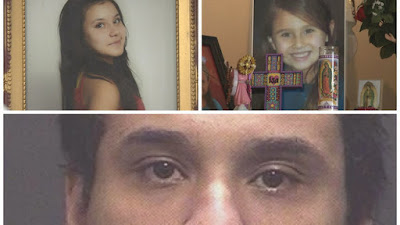 Clements, who is accused of killing six-year-old Isabel Celis and 13-year-old Maribel Gonzalez, appeared in court for a status conference Monday.

Clements, 36, was initially arrested in Maricopa County on charges of burglary and breaking and entering.

The convicted sex offender is now facing 22 felony charges including the murders of Celis and Gonzales.
INTERNET SOURCE: https://www.kgun9.com/news/local-news/prosecutors-to-seek-death-penalty-in-clements-case …..…..
https://www.facebook.com/VictimsFamiliesForTheDeathPenalty/posts/1929303473858276
Posted by SAINT MICHAEL 2012 at 1:00 PM No comments: