The Virginia Beach shooting occurred on the afternoon of May 31, 2019, when a disgruntled city employee fatally shot twelve people and wounded four others in a mass shooting at a municipal building in the Princess Anne area of Virginia Beach, Virginia, United States. He was later shot dead by police officers responding to the scene.

DeWayne Antonio Craddock (October 15, 1978 – May 31, 2019) was identified by police as the perpetrator. He worked as an engineer in the city's public utilities department until tendering his resignation in an email he sent to city management a few hours before the attack. Having resigned "within good standing in his department", Craddock still possessed a security pass to enter employee work spaces within the building at the time of the attack. In the days prior to the shooting, he was alleged to have been involved in physical scuffles with fellow city employees and threatened with disciplinary action. However, the city manager said that when Craddock resigned, he "had no issues of discipline ongoing".
Within the span of at least three years prior to the shooting, Craddock had legally acquired multiple firearms. Two .45 ACP pistols were used in the shooting and two more weapons were found at his home, one of which was another pistol of the .45 ACP caliber. The fourth weapon is still being checked by authorities.
Craddock graduated in 1996 from Denbigh High School in Newport News. Between 1996 and 2002, he served in the Virginia Army National Guard in Norfolk as a cannon crew member with the First Battalion, 111th Field Artillery Regiment. At the time of his discharge he held the rank of Specialist (E-4) and had not been deployed for combat service. In 2002, he graduated from Old Dominion University with a degree in civil engineering.
Prior to the shooting, Craddock did not have a criminal record with the exception of minor traffic violations.

Virginia Beach police named the gunman who killed 12 people and wounded four others at a municipal building on Friday as DeWayne Craddock, saying he was a disgruntled city engineer.

Craddock was killed in a gun battle with police after opening fire with a pistol in the building. All but one of his victims were employed by Virginia Beach, officials said, and the other was a contractor seeking a permit.

Virginia Beach Police Chief James Cervera told a news conference on Saturday that he would only give the gunman’s name once because city authorities want to focus on his victims.

Craddock had worked for the city’s public utility department for about 15 years, Cervera said. The police chief declined to comment on any possible motive, but said additional weapons were recovered at the scene and from the suspect’s home.

Police had previously said only that the suspect used a .45 caliber pistol equipped with a “sound suppressor” device and extended ammunition magazines.

It was the worst mass shooting in the United States since November 2018, when a dozen people were slain at a Los Angeles-area bar and grill by a gunman who then killed himself.

A disgruntled public utility employee opened fire on co-workers at city offices in Virginia Beach, Virginia, on Friday afternoon, killing 12 people and wounding several others before he was fatally shot by police, authorities said.

Virginia Beach Police Chief James Cervera said the mass shooting in the coastal resort city began as the gunman entered the public works and utilities building at the city municipal center and “immediately and indiscriminately fired upon all the victims.”

The chief later said that the suspect engaged in a “long-term gun battle” with law enforcement officers as police confronted him inside the building. One police officer was wounded in the shootout, but his bullet-proof vest saved his life, Cervera said.

The police chief said the suspect was armed with a .45-caliber handgun equipped with a “sound suppressor” device and was reloading his weapon with extended ammunition magazines as he moved through the building.

Authorities said the gunman ultimately was shot by police and was pronounced dead at a hospital.

Cervera said the suspect was a longtime public utilities employee, and described him as “disgruntled,” but declined to say more about what may have precipitated the attack.

The shooting was believed to be the deadliest act of workplace gun violence in the United States since February, when a factory worker shot five colleagues to death in Aurora, Illinois, just after he was let go from his job.

There was a scene of terror and carnage at a Virginia Beach, Virginia courthouse that left 11 people dead and many more injured.

The attack occurred on Friday at the courthouse and hours later officials from the city gave a press conference to tell the frightening facts.

“Right now I can tell you we have multiple casualties, multiple fatalities. We have 11 deceased victims there at the scene, six more victims transported to area hospitals, the police chief said.

“I do not have the condition of the victims at this particular time. I can tell you one of the individuals shot by the suspect is a Virginia Beach police officer and he was saved by his vest.

“We established a family assistance center, princess Anne middle school for the employees that worked in building two, so they can meet up with their friends and families.

“We’re also in the process of identifying all of our victims so we can make personal notification to family members. We know shortly after 4:00 P.M.

“This afternoon, a suspect entered building two. He is a long time employee of public utilities. I will not release his name at this time.

“And he immediately began to indiscriminately fire on all of the victims. Officers entered once the call went out, officers were at headquarters, they responded to building two.

“They secured as much of the victims as they could, and then they engaged with the suspect. The suspect did shoot a police officer.

“Officers returned fire. The suspect is deceased. When the scene is secure, we have a long term investigative process that’s being undertaken there’s a lot of work to be done.

“Medical examiner is on route, protocol for the medical examiner’s office. Right now we have a lot of questions. The whys, they will come later.

“Right now we have more questions than we have answers. We’re a little more than two hours into the event and we used the word event, that’s a cop term, a devastating thing that happened that none of us want to talk about, this devastating incident that will change the lives of a number of families from our city.

“So my goal will be to update you and confirm additional information as soon as we can. Our next briefing should be at 21:30 hours. We have been told the governor is enroute.

“We notified state senators and other elected officials, offering condolences to our city and to our family of those of us that work in Virginia Beach.
INTERNET SOURCE: https://thefederalistpapers.org/opinion/breaking-police-reveal-identity-virginia-beach-shooter
https://www.facebook.com/VictimsFamiliesForTheDeathPenalty/posts/2094747080647247
https://www.facebook.com/TheFederalistPapers/posts/2476053979099490

OTHER LINKS:
These are the 12 victims of the Virginia Beach mass shooting. Here are their stories.
https://www.facebook.com/VictimsFamiliesForTheDeathPenalty/posts/2097431443712144 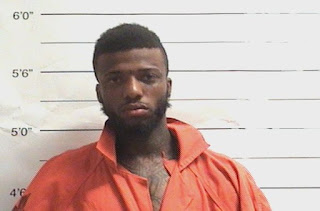 Man accused of killing 2 people within 14 months of release from prison for manslaughter: DA
By Emily Lane, NOLA.com | The Times-Picayune

A 27-year-old man is accused of killing two people in New Orleans within 14-months of his release from a Louisiana prison, where he had served time in connection to the death of a third person, Orleans Parish prosecutors said.

An Orleans Parish grand jury on Thursday (Feb. 21) handed up the murder indictment against Darnell Braud based on allegations he killed 22-year-old Peter Oatis Jr. on Nov. 2, 2017, about seven months after Braud’s April 2017 release on parole, according to a news release from Orleans Parish District Attorney Leon Cannizzaro’s office. Braud had not previously been publicly accused in that case.

Braud had already been jailed since July, though, following his arrest and subsequent indictment in connection to the shooting death of 29-year-old Jarivas Jarrow, who was shot dead about six months after Oatis was killed.

Oatis was on parole at the time of the shooting deaths of both Oatis and Jarrow. The parole and his prison sentence stemmed from a 2008 manslaughter conviction in connection to Sept. 30, 2007, fatal shooting of 18-year-old Warren Martin. Braud was 16 years old when Martin was killed. Braud was initially charged with second-degree murder in Martin’s death before he pleaded guilty to manslaughter.

Braud faces a charge of first-degree murder in Oatis’ death. Oatis was found fatally shot in the near the Seabrook Bridge, officially named the Senator Ted Hickey Bridge, in New Orleans East. Oatis’ aunt had reported him missing two days after his body was found, New Orleans police have said. The DA’s office said DNA helped connect Braud to Oatis’ homicide. First-degree murder applies when someone commits a second-degree murder along with another felony. The DA’s office listed obstruction of justice as the additional felony.

Braud faces a first-degree murder charge in Jarrow’s death, as well. Jarrow was shot dead May 24, 2018, outside his home in the Leonidas neighborhood. He was killed in front of his 1- and 2-year-old sons, just before taking the older child to school, his girlfriend Trichelle Harris told NOLA.com | The Times-Picayune. A warrant for Braud’s arrest in the case states Jarrow was shot by a masked man, but witnesses saw a car Braud was known to drive flee the scene with the gunman. Another witness later told investigators Braud told him he killed Jarrow. According to the warrant, Braud told the witness he and Jarrow had gotten into an argument at a nearby corner store the morning of the shooting.

The DA’s office is not pursuing the death penalty in either of the first-degree murder cases pending against Braud.

Braud, who the DA’s office noted, “stands accused of murder for the third time in his life,” is currently scheduled to stand trial on April 2 in the murder of Jarrow, in a case overseen by Orleans Criminal District Judge Franz Zibilich.