On this day (9 November 2008 at 00:15pm), The Indonesian terrorist A.K.A Amrozi the Smiling Assassin, was executed together with Imam Samudra and Ali Ghufron Mukhlas by firing squad in Nusa Kambangan Island, Indonesia. As I had blogged on two previous posts on Amrozi, I will give my thoughts on him. Following this article from Philip Jensen, I will give my Christian thoughts on why Amrozi’s blood must be shed next year on this date. At the same time, I was delighted with joy that Californian voters had voted no to Proposition 34, which would have abolished the death penalty and replaced it with life without the possibility of parole. Here is another reason why I blogged about The Smiling Assassin, in order to celebrate the good results of retaining California’s capital punishment. 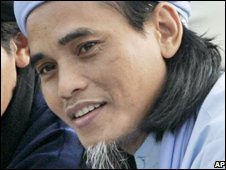 Amrozi’s character and crime are two of the several reasons why I swapped from being an opponent to supporter of capital punishment. I agree with Immanuel Kant that he must die for his crime, the mass murder of 202 victims. I support Saint Thomas Aquinas's view that Amrozi was a threat to society and he must be removed permanently as protection. Although the death penalty did not deter him from committing the mass murder, I felt that it should be carried out for justice and protection. I do not support his execution for revenge but justice and also to show empathy and sympathy for the victims’ families.
Among all the Bali Bombers, I found Amrozi the most annoying of the lot. He was also a very strong attention-seeker. But the worst of all, I could not stand the fact that he was unrepentant for his crime. I ranked him as one of the worst of the worst killers in history, for planning the terrorist attack in the 2002 Bali Bombings.

Died a martyr?
Those who requested that he would not be put to death, feared that he will die a martyr. I disagree with that, he did not die a martyr but a coward. The real martyrs are the 202 victims. As mentioned in the previous post:


Despite his carefree demeanor throughout his trial and incarceration, he was reported to have been pale faced and shaking in the moments before his execution.

The smirk on his face may fool the public that he is happy and not afraid to be terminated, however when the cameras were hidden from him, he stopped smiling and looked pale and afraid. The truth is that if he wanted to be a real ‘hero’, he should be the one that drove the van to conduct a suicide bombing, not leave the dirty job to someone else to do it. As Erich Maria Remarque was quoted in his novel, ‘All Quiet on the Western Front’: “For death is not an adventure to those who stand face to face with it.”, Amrozi was all along afraid to die, as he had appealed against his death sentence more than twice. 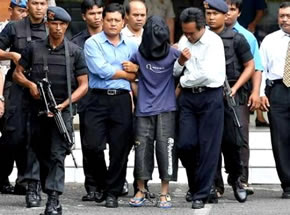 What if he was given a prison sentence?
Those who claimed that the death penalty is the easy way out for killers, should not only see how frighten Amrozi was, but also look at the cases of Umar Patek and Idris. One was given a 20 year jail term and the other was released from prison respectively.
If Amrozi had committed terrorism in Norway, he will be given only 20 years imprisonment in a ‘five-star’ hotel prison like Anders Behring Breivik, there will be no justice at all.


Let us assume that Amrozi was tried in the European Court of Human Rights (the friends of criminals), he will not be put to death at all. I quoted from Peter Hitchens’s blog, The execution of Osama bin Laden: A few thoughts 02 May 2011 3:43 PM: But the many more-or-less liberal politicians and commentators who now exult at this death have a problem that I don't have. I believe in the death penalty, as deterrent and retribution. They don't. Had he fallen into the hands of some EU tribunal, bin Laden would have faced life imprisonment in some Dutch celebrity jail, doing his basket-making alongside various Serbs, and a few Croats for good measure, while the kitchens toiled to provide him with halal meals. This refusal to execute murderers is supposed to be a principle, so wouldn't be affected by the huge numbers of murders involved in this case. Shouldn't they then be condemning this execution too? On what morality or legality is it based, if we do not accept the death penalty?
I agree with Peter Hitchens in the sense that Amrozi will most probably get three good meals a day with TV and computer. But to add insult to injury, he might get to walk free again. Here are some examples to show what a joke the justice system can be if you let terrorists keep their lives:

1. John O’Sullivan was quoted in his article: Deadly Stakes The debate over capital punishment (30 August 2002) - But this particular dispute is likely to be moot since, as soon as capital punishment is safely outlawed, the ACLU and its camp-followers will immediately file suit to have the courts declare life without parole to be a cruel and unusual punishment outlawed by the U.S. Constitution. In the British debates of the 1970s over whether or not terrorist murderers should face execution, I well remember being assured by politicians who later served as Northern Ireland ministers that convicted murderers would have to serve their full sentence; for there was simply no legal way of releasing them beforehand. Ho Hum. Those same murderers are now walking the streets of Belfast "on license." The Grim Reaper grants no paroles.

2. Read the case of Pearse Jordan.


3. In 2005, Germany freed Mohammed Ali Hamadi after the terrorist had served 18 years for murdering Navy diver Robert Dean Stethem. Press reports said that "a life sentence in Germany ranges between 20 and 25 years, with the possibility of parole after 15 years." [Do We Need the Death Penalty? Yes, It's Ethical and Effective Sunday, April 29, 2007 by Eric L. Rozenman]


4. With a new source from The Daily Mail, http://www.dailymail.co.uk/news/article-1353210/Lord-Carlile-Human-rights-makes-UK-safe-haven-terrorists.html#

Last May, a court ruled Al Qaeda operative Abid Naseer (pictured right) and his accomplice Ahmad Faraz Khan could not be deported because it would infringe their human rights.

The pair were planning a 'mass casualty attack', probably against shoppers at the Arndale Centre in Manchester over the Easter holiday last year.

But judges said Naseer, 24, and 26-year-old Faraz Khan - who came to Britain as students - should not be sent back to Pakistan because of the risk they could be tortured.

5. The release of the Lockerbie Bomber.

Abolitionists’ views?
Some Abolitionists preached that they opposed the death penalty, even for the Bali Bombers (I am not surprised, as usual). However, I did not see them stand at the Indonesian Embassy at their own individual countries for a candlelight vigil or carrying anti-death penalty slogans and signs. Nobody even wore T-shirts saying, ‘I AM AMROZI’, as they did with Troy Davis. Why not? It was because his crimes were so horrible that all the abolitionist could do was to say they disagree with his execution, but did not campaign hard to stop it.

Conclusion:
As mentioned above, I became a supporter of the death penalty when I was all along opposed to it. Even if I were an abolitionist, I personally will not oppose Amrozi’s death sentence, as he crimes were too heinous and I could not stand his attention-seeking attitude. I was extremely satisfied that he was put to death by the firing squad, rather than a painless death by lethal injection. His blood was shed by most probably, a FN FAL rifle. One of my friends rather he be shot at the stomach and left to bleed to death, where he would take a few hours to die a painful death. I would agree to that, as it was a horrible death like the crucifixion. Amrozi deserved to die and it is justice and protection, not revenge.

See the following photos which show The BRIMOB in practicing for the firing squad: 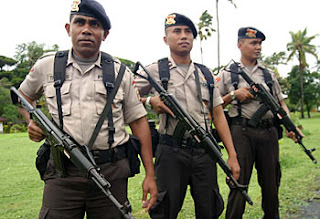 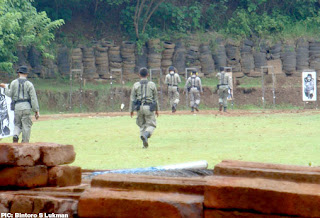 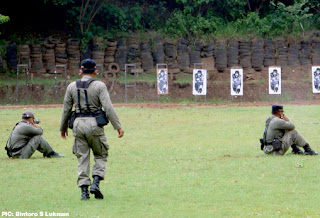 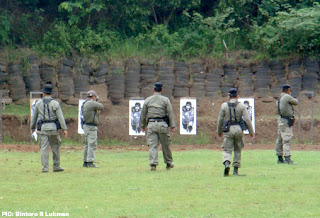 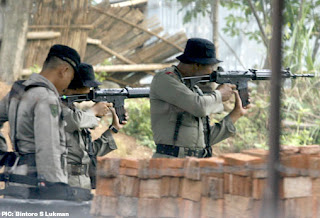 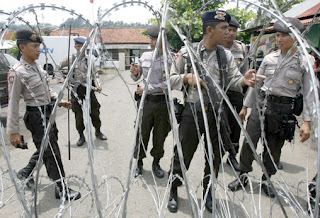 Check this video to see the slideshow of the Bali Bombers:

Check this video to see their execution animation:

Check this video to see the aftermath of their execution: